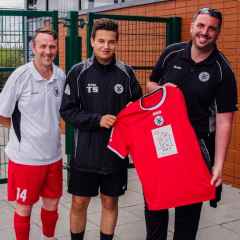 My name is Matt Bryant and this story is about my daughter Jessica.

Before my daughter was diagnosed I was chairman of a football club with over 250 children plus senior teams playing under Grimsby Borough FC. When Jessica, who had already had open heart surgery, was diagnosed with bilateral wilms tumour I was like all people before us – distraught. Those reading this will understand how everything else goes out the window and the world caves in around you. For us it was like having it happen twice. What had we done wrong ?

I left the club I have my son playing in and have being involved for over 14 years with immediate effect and began the tough journey ahead determined to beat it. I don’t need to tell people reading this how much it changes you and as much as you are confident and determined the anxiety eats at you and the effect on all the family is massive. The best way I have described it is like a being on a roller coaster with all the ups and downs that come with it.

Travelling to Sheffield a place which is not your home town each week and sometimes spending days at a time not knowing people is another hurdle as you are in a very lonely place where you feel boxed off from the normal world and it is daunting. It was Dr.Dan Yeomanson we first met on that day which feels like a lifetime ago which in fact was just 10 months ago. He was superb that day with Jessica and so were all the team on M3 and that was the first real support we felt that was not family and friends who – as much as they are brilliant – can never understand unless they have experienced something like this with their own child.

So we had the support of people that not just understood but could help and we starting to feel strong and focused on the battle that lay ahead. The next people we met were Jude Marshall from Clic Sargent and Rachel Ducker our key worker who was so kind and for a long while the only two people who we could let our guard down with. This was such a release valve which we are truly grateful.

It was in the clinic that we experienced some of the most humbling experiences. From the staff and play nurses [Jesscia will want me to mention Charlotte] to the other doctors from the clinic; these are people that I have the utmost respect for. The way they interact with the children and the parents makes coming to clinic a place children feel safe and normal if that make sense because what is ‘normal’ for these kids ? We have met so many families along our way and made some very good friends and that alone is a good support network.

So with all the support of these people it helped us on our journey, this leads us to Jessica’s operation which was extremely hard but the doctors and nurses along that process that lead to Jessica being back on M3 were amazing.

It was on the day of Jessica’s operation we were sitting somewhere in the hospital with no plans of where we were going to sleep as it didn’t seem to matter at that time when Beryl from PACT who had searched the Hospital to find us introduced herself. The timing could have not being better and Beryl was like our mum that week making sure we was ok and at least twice a day coming to see us and offer support and ensuring we had everything we needed, this was support that was a parent that had being there and had the t shirt and saw it form our view and at that time it was perfect.

The house when we were shown around was amazing and being next to the hospital was such a godsend for our stay during that time and during her treatment. Jessica is near the end of her treatment now and I was asked to help back at the club and after everything we have been through we just wanted some quiet time.

I was pestered and asked what it would take for me to get involved again and the answer was PACT and the new clinic scheme. So we have made PACT the club’s chosen charity each year to raise funds for both the general fund and the appeal. I know we are extremely lucky for the position we are in and there are children and families that are in all sorts of different positions and have a long road to travel yet and even future families and children so there will always be a need for PACT and the new clinic is such an important part of looking after children for years to come.

The club truly understand the difference it makes and are committed to helping raise funds on a yearly basis which allows me to pay back each year for giving me a future with Jessica.

We have several sponsors that have waived there company logos on our shirts to allow the PACT logo to appear and show the club’s support to the charity.

One of our partners is the owner of Pleasure Island Melanie Wood and she is a big supporter of our club and has kept in touch all the way through Jessica’s treatment. She has offered PACT a free day out for PACT families as a thank you for all the good work they do. The club are planning a race night, sports dinner, collection through the money tubs at the club cafe and a football tournament to raise money in the next year and hope to repeat it each year to continually help families.

The attached picture is our U17 team receiving the first kit from myself with PACT on the shirts.