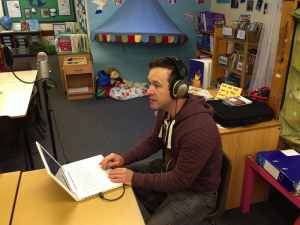 A Dinnington plumber has swapped his plunger for a plectrum in a bid to record a Christmas charity single to help raise money for PACT.

The song called “Santa Clause, am I naughty or nice?” is being released by father of two Paul Ballington who decided to pick up his guitar after hearing the story of a little girl in his son’s class, whose family had been supported by the charity. The songwriting plumber has even drafted in the help of the girl’s friends by getting her class at Anston Park Infants School in Rotherham to sing the chorus. Paul said:

“I have always wanted to write a Christmas song but I have never got round to doing it so when I heard about the support the family had received from PACT and the difference it had made to them, I just wanted to do something to help. The kids were amazing and it was great to get them all involved and watch the excitement when they recorded their lines. Each and every one of them was a true professional.”

The 36 year-old has been writing songs on and off for 15 years, starting with little ditties and birthday songs for friends and family. More recently he has begun writing tailor made songs for any occasion such as birthdays and weddings and it was only a matter of time before he set his sights on climbing up the charts with a Christmas song. Paul added: “Hopefully my song will raise some much needed money for PACT to support other families who are dealing with childhood cancer. I love singing and making people laugh and hopefully the light hearted lyrics will put a smile on people’s faces this Christmas.”

“I was really pleased for myself and my class to be part of raising money for such a worthwhile cause. The children loved the funny lyrics in the song and thoroughly enjoyed singing it.”

“Santa Clause, am I naughty or nice?” is available now for download from both iTunes and Amazon and it was recorded in Sheffield at the Steelworks Studio.

Paul has also set up a JustGiving page if anyone wants to make a donation to PACT instead of or as well as buying the song.