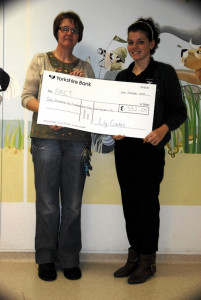 On 13th September Lily Coates, together with a group of 32 family and friends, walked 5K from Endcliffe Park to Forge Dam and back and raised £1,552.09.

The walk was the brainchild of Lily’s family and friends particularly Julie Holmes and her sister Janice who normally do the Race for Life but after visiting Lily on Ward M3 and seeing the good work that PACT did, decided to raise the money for them through a sponsored walk. The weather was beautiful and members of the public gave generous donations along the route which were added to the total raised in sponsorship monies

Lily and her family had expected to raise about £300 so were amazed with the final total raised and wanted to pass on an enormous THANK YOU TO ALL who gave their time and money so generously.

The photo shows Lily presenting the money to Beryl.