0
On 05/23/202205/23/2022
Not all hero’s wear capes but Seth does! Here his mum Jodie explains their journey so far.
Seth was diagnosed with Acute Lymphoblastic Leukaemia on 2nd June 2021 at the age of 5 after a 6 week battle with the GP.
Seth was suffering with joint pain in his legs, particularly on a night time. He had always been a pale child but he was beginning to look yellow in colour. He then developed a small rash of red spots on his neck. I had 3 appointments with the GPs and was told growing pains and an allergic reaction until he started with night sweats and the final doctor was as concerned as we was and he sent us straight to Bassetlaw children’s department where they carried out a blood test. Due to it been in the middle of lockdown I had to find out in a room alone that my sons blood results were very worrying and that he may potentially have some form of blood cancer. Within 12 hours we had been transported to Sheffield children’s hospital via ambulance and he was given his first blood transfusion. The following day we was given the full diagnosis of Acute Lymphoblastic leukaemia with 100% Leukemic blasts found in his bone marrow.
I don’t know how I managed to take anything in. I felt numb and couldn’t believe this was happening to us. It didn’t seem real. As a mother I was terrified for what this meant and what the future held for us. We was then handed so many information sheets and forms and told we had to consent to him having around 3 years worth of chemotherapy treatment… and that was when life as we now know it began.
The first month was very difficult seeing Seth look so poorly. When we arrived at Sheffield he didn’t really look ill but within a couple of days it was very obvious that he was a little boy that had cancer. Induction was rough on him, the sickness, the steroids, the weight gain, the loss of appetite, his appearance and personality changed and then we found out he hadn’t responded to the chemotherapy as we had hoped. He was then moved to high risk and we continued on to the next round.
At the end of this we had another devastating blow that he still hadn’t responded well and hadn’t reached remission. At this point we had to seek alternative treatment and we was told he had now gone from the 95% survival rate down to 5%. We opted for car t cell therapy as our best option and Seth was enrolled onto a trial at Great Ormond Street. After a month long stay in London, Seth had his Car t cells infused on 1st December 2021 and we found out he was finally in remission with no disease detected on 31st December 2021.
But unfortunately after just 8 weeks we found out once again that treatment hadn’t worked as it should. It was a long gruelling heart-breaking wait to see if he had remained in remission or relapsed.
I honestly felt like life was out to get us at this point. I had avoided thinking it throughout this whole journey but it crossed my mind that we may lose our boy to this cruel disease.
Thankfully we found out he remained in remission but that without further treatment he would 100% relapse. We looked into a bone marrow transplant but unfortunately didn’t have a full match and his sibling wasn’t a match either, so we opted for carrying on with the chemotherapy path that we was originally on.
We are now back at Sheffield children’s Hospital and Seth Is almost one year into treatment and just about to finish the intense part of treatment and head into 2 years worth of maintenance chemotherapy treatment.
This will hopefully bring some normality back into our lives and Seth can get back to school and see his friends after a whole year out of education. He is also counting down the days that he can get back onto his motorbike. He amazes us every day with how strong and brave he is. He has smiled majority of the way through this and really keeps us going.
As a parent its the toughest thing I will ever have to endure. It still doesn’t feel real. I don’t want it to be real but it is and we just have to try and deal with it now and get Seth through it the best we can. We are now living a complete different life than we did before and it will never be back to normal as we once knew it.
Long hospital stays can be so draining and hard and there has been many times I wouldn’t of been able to leave and I wouldn’t of eaten anything the whole day but thankfully Pact have been there for us to provide us with breakfast and dinner which makes such a huge difference when caring for your sick child and Seth loves nothing more than seeing the children’s treat trolley come round on clinic days. We are really looking forward to been able to get away in one of PACTs holiday caravans in the near future. After this we are all ready for a break.
#Superheroseth 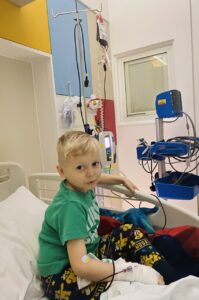 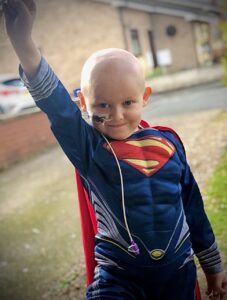