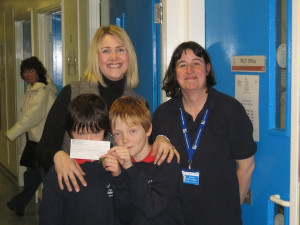 The Natalie Wilkinson Piano School put on a concert to raise money for PACT and the Children’s Hospital Charity and all 300 tickets sold out within a couple of weeks.

There were some stunning piano performances together with local bands “The Mercer”, “Italia 69” and “Cherry Daze” and they had huge support from the audience. There was also a raffle with prizes donated by Steve Peat and Akpo Sodje. Tankersley Park Golf Club also supported the event by letting us host a separate auction and raffle at the end of October.

The fundraising was inspired by three families who go to the Piano School, who are affected by Cerebral Palsy and Leukaemia and have received support from both the charities. The event raised £3,202.00 so PACT received £1,601 which is fantastic and a big thank you to everyone involved.

JobCentre Plus raise £1,200 for PACTDaniel swims for PACT