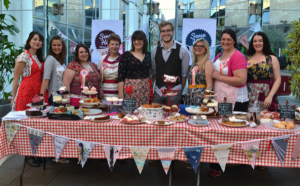 Seven Hills WI was established in 2009 and is South Yorkshire’s largest WI group. Each year they choose a charity to support and nominations are put forward by our members and decided by a vote. Lindsay Garfitt from the group has a special connection to PACT as her three-year-old niece Isabelle was diagnosed with Neuroblastoma last June and has undergone surgery, chemo and radiotherapy at Sheffield Children’s Hospital. Thankfully, Isabelle is now doing really well and is cancer free. Lindsay said

“The help she got from PACT was fantastic so when I put the charity forward to my WI group everyone agreed we should support it this year as a thank you for how much you help Izzy and many, many other children like her and their families”.

At the Sheffield Food Festival last weekend the Seven Hills WI team baked cakes to sell on their stall and managed to raise a massive £1,056 for PACT in the process. Their 2014 charity calendar is another big fundraising project and it will feature their members in various landmarks in Sheffield including the City Hall, Peace Gardens, the train station, the Leadmill and Meadowhall. They have managed to secure sponsorship to cover the cost of printing so 100% of the sales will go to PACT. We will tell you how and where to buy their calendar as soon as we can.

Please get in touch with Seven Hills WI through their website if you need any more information. In the picture you can see some of the Seven Hills members with James Morton from the Great British Bake Off who announced the winners of the group’s Best in Show competition (all money raised through the competition went to PACT).

Glitterball raises £1,600 for PACTRobert Hanley raises over £100 for PACT at Tupton carnival