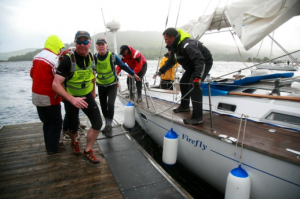 Team Firefly took part in the Three Peaks Yacht Race Challenge in June and raised over £4,300 for PACT.

The team of sailors and runners was Paul Ellis, Mark Ramsden, Murray Palmer, Dave Smith, Roger Tushingham and Barney Greenhill (shore support). The challenge combined yachting, mountain running and cycling and the team had to sail from Barmouth on the Welsh coast to Fort William in Scotland via Caernarfon and Whitehaven climbing the highest peaks in Wales, England and Scotland on the way.

We would like to pass on our thanks to them for all their hard work on behalf of PACT and also to their supporters for being so generous.