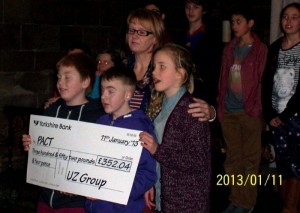 The UZ Group is a Kids Club based at Silkstone Church and they know about PACT as one of the church members used to work in the classroom on M3. Beryl Welburn went along to talk to them in November and tell them all about PACT and they decided to sell Christmas goods to raise money for us.

The bazaar gave the children their first money raising opportunity and the evening before was spent cooking, painting, sticking and tying in order to produce Christmas products for sale. The Christmas decorations, biscuits and calendars sold well alongside the things supplied by PACT enabling them to raise £124 and sales since have moved this figure to nearer £200. They have also donated £100 from their own funds so the total handed over to Beryl earlier this month was £352.04.