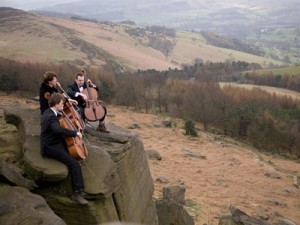 The Extreme Cellists, known for their performances in out-of-the-ordinary places such as on cathedral rooftops and summits of mountains, raised £1,268.89 for PACT after Clare Wallace, James Rees and Jeremy Dawson carried their instruments from one side of England to the other. They gave at least three performances each day as they followed in the footsteps of Alfred Wainwright and made their way along the 192 miles from Coast-to-Coast.

The challenge began in St Bees, Cumbria, and the walk covered 192 miles through the Lake District, across the Pennines, and across the Yorkshire Dales and North York Moors national parks, before finishing in Robin Hood’s Bay near Whitby, North Yorkshire. On each of the 14 days of the walk, the Cellists gave three performances – at the beginning and end of each stage, as well as at least one more somewhere along the way.

The Extreme Cellists were formed in 2003 and have since raised over £15,000 for charities by playing in various extreme locations. In the summer of 2006 the Extreme Cellists played on the roof of all 42 English Cathedrals in just 12 days, raising over £5,000 for Aspire and Shelter. In 2008 they raised a similar amount playing at the summits of the tallest mountains in Scotland, England, Wales and Ireland. Other previous events include the “Monopoly Board Challenge” in which they gave short performances at each of the 22 streets on the London Monopoly board in just one day.