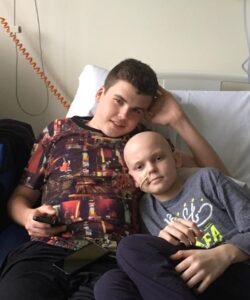 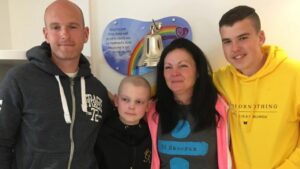 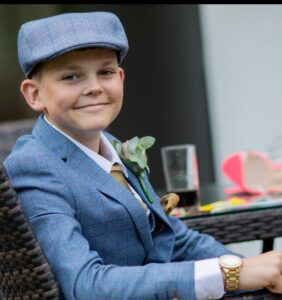 In March 2018 George began to feel poorly, the family thought it was food poisoning but after a couple of days his stomach became swollen, and he wasn’t feeling any better. George was transferred to Sheffield Children’s and quickly admitted to Intensive Care.

He was put into an induced coma because he had a tumour so big it was crushing his organs. After surgery his parents, Charlotte and Roger, were told there would be a 50/50 chance he would make it.

But, after a week of being in intensive care George’s tumour began to shrink. His parents were told that he had an aggressive form of Non-Hodgkin’s Lymphoma, a type of blood cancer.

George began chemotherapy on the Cancer and Leukaemia Ward (Ward 6) and between starting treatment in March and finishing treatment in September he was only at home for a few days.

The ward became a home from home for the family with both mum Charlotte and dad Roger spending most of their time there too, at George’s side.

After months of treatment in October 2018 George rang the end of treatment bell and entered remission, he’s back at school, doing well and building on his ever-expanding trainer collection.

At PACT we are raising money to transform the Parent’s Room on the ward, for parents like Charlotte and Roger, when they need it the most. We asked Charlotte what the Parent Room means to families on the ward:

Charlotte said, “George’s cancer was a very aggressive one and needed aggressive chemo which is why we spent all of George’s treatment on the ward. The Parent Room room was an escape room. As most parents will agree sometimes parents can feel very low and had to rush to this room just to try and hold back our tears, I didn’t want to cry in front of George, as I didn’t want to upset him. It is also a place that mums would give that very important hug to another mum when needed.

The parent room as it was when we were on there was very bare only having one hot water tap to make hot drinks and only so many cups and plates, one toaster and one fridge which was for everyone on our ward. It will help parents in the future if this room has more facilities in it for cooking as when you are there long periods of time take aways is all you can eat and are very expensive. Please donate to PACT if you can, I know first-hand the difference the new Parent Room will make.”

To find out more about how you can help please visit https://pactfriends.co.uk/donate-to-pact-sheffield/

Working together with The Sheffield Children’s Hospital Charity https://www.tchc.org.uk/

How to create your own woolly catsMeet our new chairperson