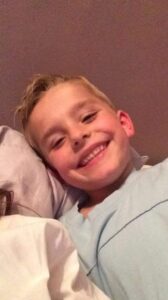 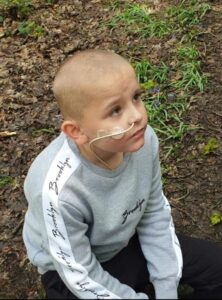 Sam was diagnosed with Acute Lymphoblastic Leukaemia in January 2018. I had taken him to A&E several times as he kept complaining of pain in his arm and later in his hip. He could not explain what had caused it as he could not remember a fall or bump. At first they thought he had a small fracture in his collarbone as something showed up on the X-Ray and we called back to fracture clinic. In the meantime Sam had become more unwell and when they finally did a blood test it became clear it was more serious. His liver and spleen were enlarged, his glands were raised, and he was put on IV antibiotics straight away.

We were transferred to Sheffield Children’s Hospital by ambulance, and I remember thinking: ‘This cannot be happening, they must have got it wrong! He was playing football not long ago!’

A bone marrow biopsy the following day confirmed what was already suspected. Sam had cancer. I mean, how do you even get your head around that?

Treatment started straight away and for the 2 years that followed our lives revolved around Sam, cancer, and the hospital.

Sam struggled a lot with the side effects from chemotherapy. He developed a blood clot on his brain that required 2 injections a day for about 4 months. He lost the ability to walk for months and had to get about in a wheelchair. He did not tolerate the high dose methotrexate and was taken of the trial. He felt unwell most of the time and was unable to attend school.

We technically reached maintenance, but still had to come in for weekly blood tests as Sam was always neutropenic. He also has serial casting on his legs and had to have braces to stretch up his muscles. The consultant used to say: ‘He is doing it the Sam way’ as most children are more settled in maintenance and manage to go back to a more ‘normal’ life.

After 22 months Sam was admitted with a temperature and the consultant felt an enlarged spleen. A bone marrow biopsy was done to rule out relapse. After extensive testing Sam was diagnosed with Portal Hypertension caused by the chemotherapy and the decision was made to stop his treatment. Carrying on could cause more damage to his liver which would have made a transplant, if needed, very tricky. I remember feeling absolutely devastated as the chemo was what was keeping the cancer at bay and stopping it 15 months early was not good. Looking back we made the right decision. This was just before Covid arrived and we all went into lockdown.

It is now 2 years ago since treatment was stopped, and Sam is overall doing well. He actually started feeling better as soon as the daily chemo was stopped so he must have been hypersensitive to it. He still struggles with his mobility and has a physio/exercise session every week to build up his muscle tone and stamina. He also trains with his football team every Thursday night. He remains under the liver specialist and has now moved to the Late Effects clinic.

After 3 years at home, he finally attends school more regularly and loves spending time with his friends. School is tricky as he started in Year 7 in September, and he has missed so much learning time, but he really tries. We are all in awe of his resilience and strength.

Not all hero’s wear capes but Seth does!Can you help?